June 6, 2019, in the framework of the St. Petersburg International Economic Forum, held in St. Petersburg, a tripartite agreement was signed on the establishment of the Bronka transport and logistics center. Oleg Belozerov, Chairman of the Board of Russian Railways, Alexander Beglov, Acting Governor of St. Petersburg, and Andrei Zaitsev, General Director of TLC Bronka, took part in the signing ceremony of the agreement. 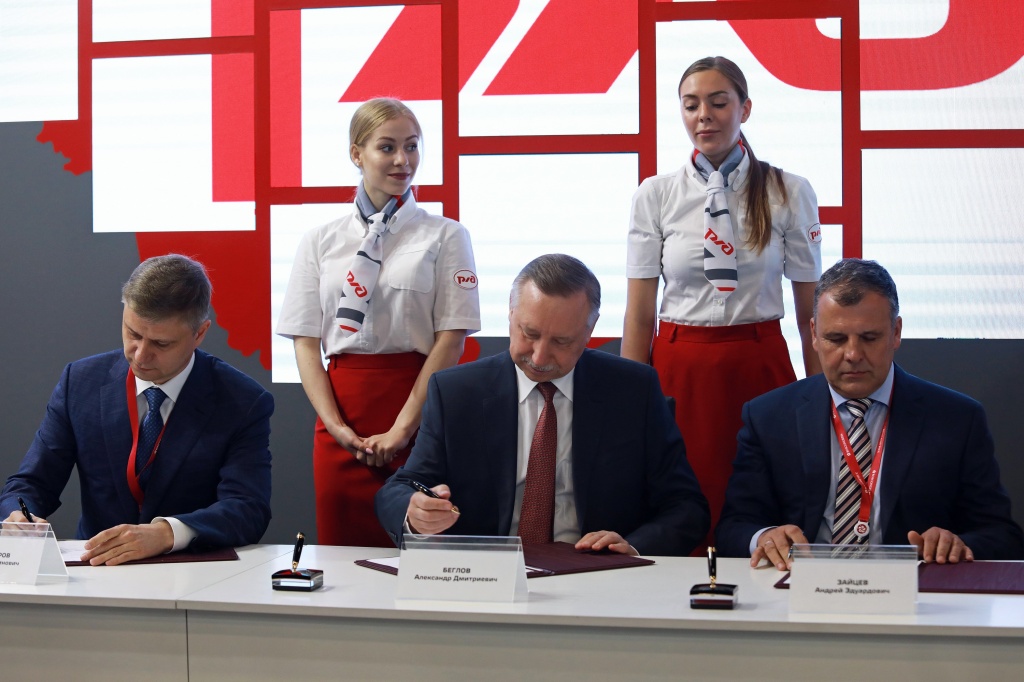 The construction of the Bronka TLC will allow St. Petersburg to receive a new trunk facility with maximum capacity and a high level of infrastructure, which will accelerate freight traffic and reduce their cost due to economies of scale and close interaction of several modes of transport at once.
The TLC Bronka project provides for the construction of a trunk railway infrastructure (7 tracks with a total length of more than 7 km), including auxiliary facilities, access roads, warehouses, and service points on an area of ​​more than 310,000 m2. The project is implemented at the expense of TLC Bronka LLC’s own funds without state financing.

The unified set of track and freight infrastructure of the TLC of Bronka and the adjacent port of Bronka (operator and owner - Fenix LLC), as well as the unification of cargo units (containers) will provide additional transport and investment attractiveness to the city and the Leningrad region.

“During the development of this project, the experience gained in the design, construction and commissioning of the modern deep-water port Bronka played a big role. Considering the prospects for the development of international trade, there is every reason to believe that the Bronka TLC will accelerate the integration of the national transport system of the Russian Federation into the global transportation system of cargo transportation, ”Nikolai Negodov, Director General of Fenix ​​LLC commented on plans to build a TLC.
Help:

About the agreement:
In accordance with the agreement, LLC BLC Bronka will develop investment proposals for the construction of industrial, logistic, social, business and engineering and transport facilities, search for and raise funds, and subsequently ensure effective operation of the facilities. In turn, JSC Russian Railways and the administration of St. Petersburg are within their powers ready to provide the necessary information and consulting support for projects.


Transport and Logistics Center Bronka is a joint venture of Fenix LLC and Logoper LLC, created to solve the problem of building a modern transport infrastructure facility located on the territory of the MSCC Bronka. The main task of the Bronka TLC is the formation of an important part of the East-West trade route for more efficient use of the transit potential of the Russian Federation, as well as to intensify the economic and social development of the adjacent territories.


MSCC Bronka is the only deep-water port in St. Petersburg capable of receiving vessels with a length of up to 347 meters, a width of up to 50 meters and a draft of up to 13 meters. Port Bronka specializes in handling containers, rolling and general cargo. It was put into operation on December 15, 2015.
Today, BMSA is capable of processing about 1.9 million TEU * per year and more than 260 thousand units of automotive and special equipment.
* TEU is a generally accepted measure of volume, equal to one 20-foot container and about 34 cubic meters.

Share:
Read other news
10.02.2022 Appointment of a New General Manager at Fenix LLC
Mr. Valery Yemets has been appointed as General Manager at Fenix LLC. The decision on this was made by the Federal Agency for State Property Management (ROSIMUSHESTVO), which acts on behalf of the Russian Federation, the sole stockholder of Fenix LLC.
Перейти к новости
22.12.2021 Direct service from Chinese ports to Port Bronka
On 21st of December 2021 Executive Director of Fenix LLC (operator of Port Bronka, St. Petersburg) Alexey Shukletsov and Chairman of the Board of  Neptumar LLC (agent of Chipolbrok in Russia) Andrey Goridko have signed an Agreement of close cooperation for direct shipments from China to St.Petersburg, Russia.
Перейти к новости
10.12.2021 Port Bronka welcomes green and ultra-green vessels by special bonus trend
As from 1st of January 2022, Port Bronka provides 10% discount for mooring and quay operations for vessels having energy efficient propulsion.
Перейти к новости
FB
Send a message